Create an Account - Increase your productivity, customize your experience, and engage in information you care about.

On June 27, 2005 Lieutenant James Weaver was shot and killed with his own service weapon during a struggle with a juvenile prisoner on Tollgate Road, in the City of Petersburg, at approximately 1:30 pm.

Lieutenant Weaver was returning the juvenile from a court appearance in Amelia County to the Crater Juvenile Detention Center. During the drive the prisoner was somehow able to get out of his leg restraints and handcuffs. The prisoner reached over the front seat of the vehicle, surprising Lieutenant Weaver, and grabbed his service weapon from its holster. The boy then forced Lieutenant Weaver to drive to a residential area. 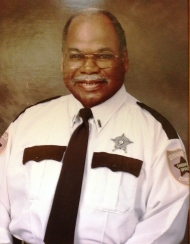 The suspect fled to a nearby apartment where he remained until turning himself in 90 minutes later. He was charged as an adult with six charges, including capital murder. On June 13, 2006, the suspect plead guilty to first degree murder and six other charges.

Lieutenant Weaver had served with the Dinwiddie County Sheriff's Office for 16 years. He is survived by his wife, three children, and six grandchildren.